← back to home page

Windows 3.1 and MS-DOS development isn't dead! I went searching for Wordle clones for Win3.1 and DOS, and found way more than expected. All-in-all, there are 2 Wordles for Microsoft Windows 3.1, and an incredible 7 different Wordles for DOS! (Let me know on Twitter if I missed any.)

When I was testing these, I noticed that some have a common bug where the highlighting is incorrect and can make it look like there are more of a letter than there actually is. For example, if the word is PEACH, guessing WEEPY will highlight the first E green and the second E yellow. To be fair, I went back and tested all of them and marked them as either 🏆 not having the bug, or 🐛 having the bug.

Wordle is harder to implement than it seems! As another data point, 3blue1brown also overlooked this subtlety and calculated the wrong optimal starting word.

I made a Wordle clone for Windows 3.1 using Delphi 1!

It was a fun trip down memory lane and a reminder of how primitive IDEs were back then without things like block indent/unindent or autocomplete. pic.twitter.com/qVavW9jGW4

This was my favorite Wordle from an aesthetic perspective. It just fits in, both from a look-and-feel standpoint, and from a technical standpoint. It really seems like the kind of game that would be bundled with Windows back in the day.

Windle is written in Delphi, and the creator has some nice screenshots of the Delphi experience on their website.

I should also note that this Wordle does not follow the original once-a-day word list, and also does not share the same dictionary as the official Wordle. There are both 16-bit and 32-bit versions - if you're on a 64-bit Windows, the 32-bit version should run right out of the box. It is also known to run using various compatibility layers like WIN-OS/2 and Wine.

Another Windows 3.1 Wordle, this one is written in Visual Basic 3 and uses a Microsoft Access database for the corpus. It's an interesting choice because it requires a lot of libraries, making the whole thing more than 4 MB. You would need at least two floppies to distribute this, but it has sound effects!

I also tried this on Linux using Wine, but was not able to get it working.

WorDOSle features nice tiles made from the box-drawing characters and features a monochrome option as well, for those using a monochrome display like the IBM 5151 that shipped with the original IBM PC.

A pretty straightforward implementation that looks a lot like WOR-DOS and WORDLOS. This was one of the Wordles that I tried on my IBM PC (with 4.77 MHz Intel 8088), and it actually does support monochrome. On a monochrome display, instead of yellow and green backgrounds it shows an underline or inverted background/foreground.

I don't know how to pronounce this and I'm sure I botched the name in the video, but this looks and feels very similar to the two games above. It was written in assembly, and you can see the WORDLOS source code on Github.

This is the only one out of the bunch that doesn't attempt any kind of graphical interface at all — just plain ol' text I/O. Which presumably makes this the only one that works over a teletype, but you didn't shell out $1,565 for an IBM PC to run software remotely, did you? 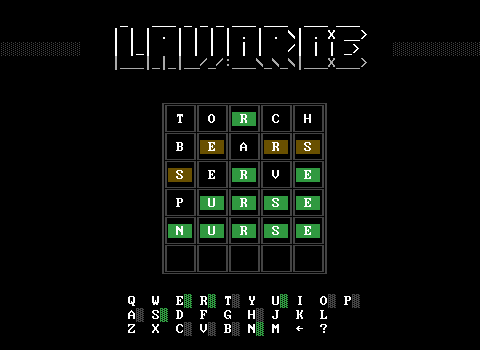 Laworde probably wins "Most Interesting Implementation" as it's built on ZZT, Tim Sweeney's adventure game / adventure-game engine. (Technically, it's built on FirmWeave which is a fork of ZZT.)

Yes, using the arrow keys to select letters is a bit annoying, but at that point the animated title with music has already won you over.

Everyone appears to be doing retro ports of Wordle, so I thought I'd jump in with a 1-day port to DOS: DOSWord! Download in the replies. pic.twitter.com/hdFBVLVZ1S

DOSWORD is not as big as WinQuest, but it's a sizable binary. But you get some really nice graphics and even a bonus wavy animation when you win!

Be aware that is a 32-bit game and you need a relatively newer machine. The game's page says it requires a 486 or better and MS-DOS 5 or newer.

Many of these games run in the browser for maximum convenience, assuming you have a modern browser. Outside of using a real DOS, DOSBOX is the next best thing. And if you happen to still be using Windows in this day and age, the 32-bit programs here will probably run without any special work, and the 16-bit ones will probably work on a 64-bit Windows if you install winevdm.

Some links on this website are affiliate links - River's Educational Channel may receive a commission if you purchase an item through the link.